I didn't pick the best day to look for the Belted Kingfisher nest near Buxton, Oregon that was reported by Lars Norgren on June 10th. The Banks-to-Vernonia Trail was packed with bikers, hikers, walkers, dogs, and horseback riders yesterday.  Many people stopped to ask what I was watching as I was (trying) to hide behind a makeshift blind fashioned from small trees and ferns. It took two and a half hours of waiting for a break in the rain and trail activity to capture a brief feeding visit that culminated in a 2-second view of an adult at the entrance to the nest.

The location and orientation of the burrow are not conducive to getting good looks inside.  Having said that, if you catch this nest near fledging time, I am sure the show will be worth the trip.

The Buxton Tressle:  The nest is on the left, 0.52 miles down this track. 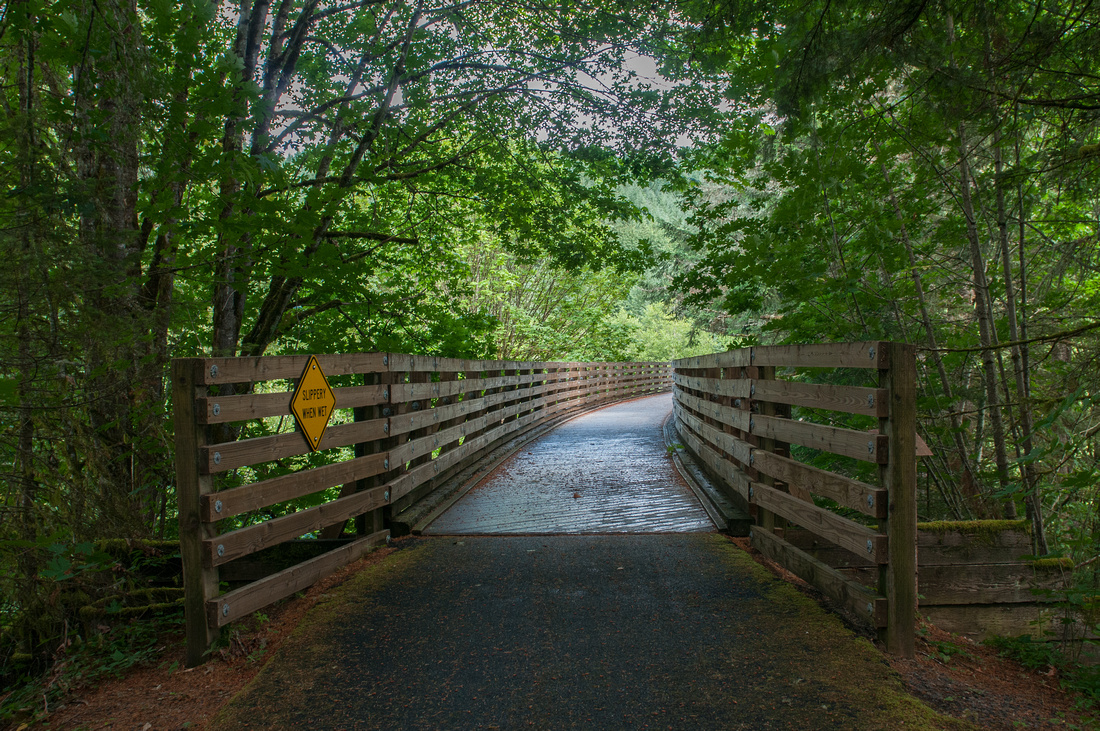 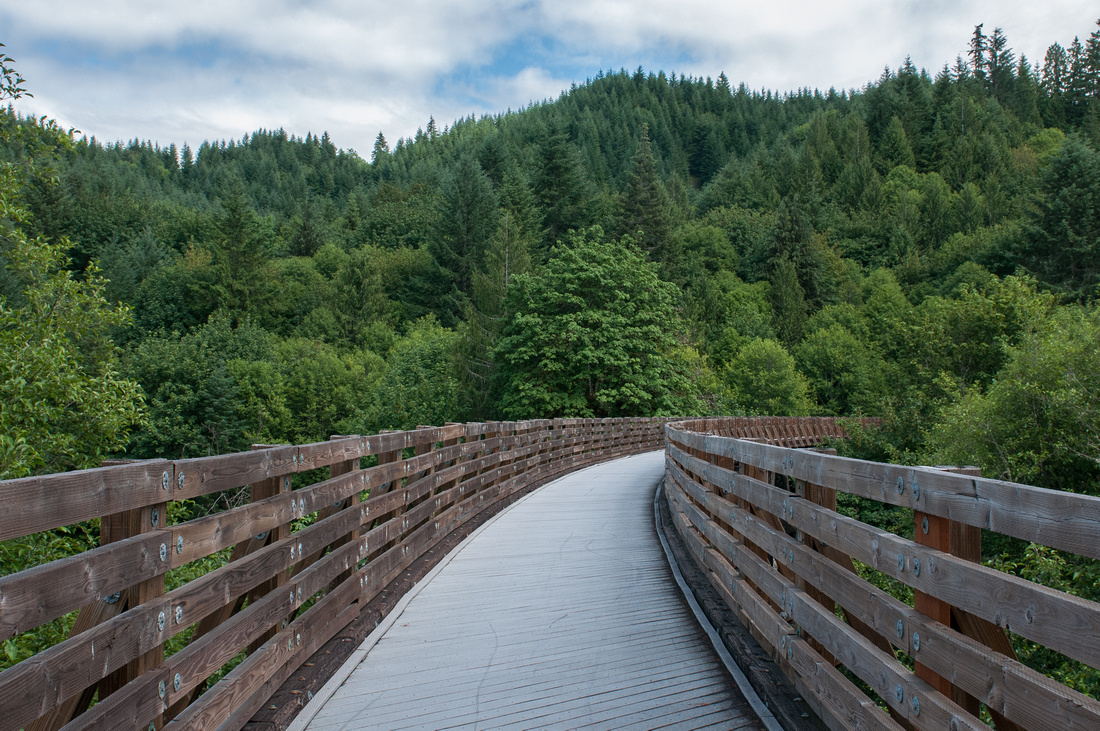 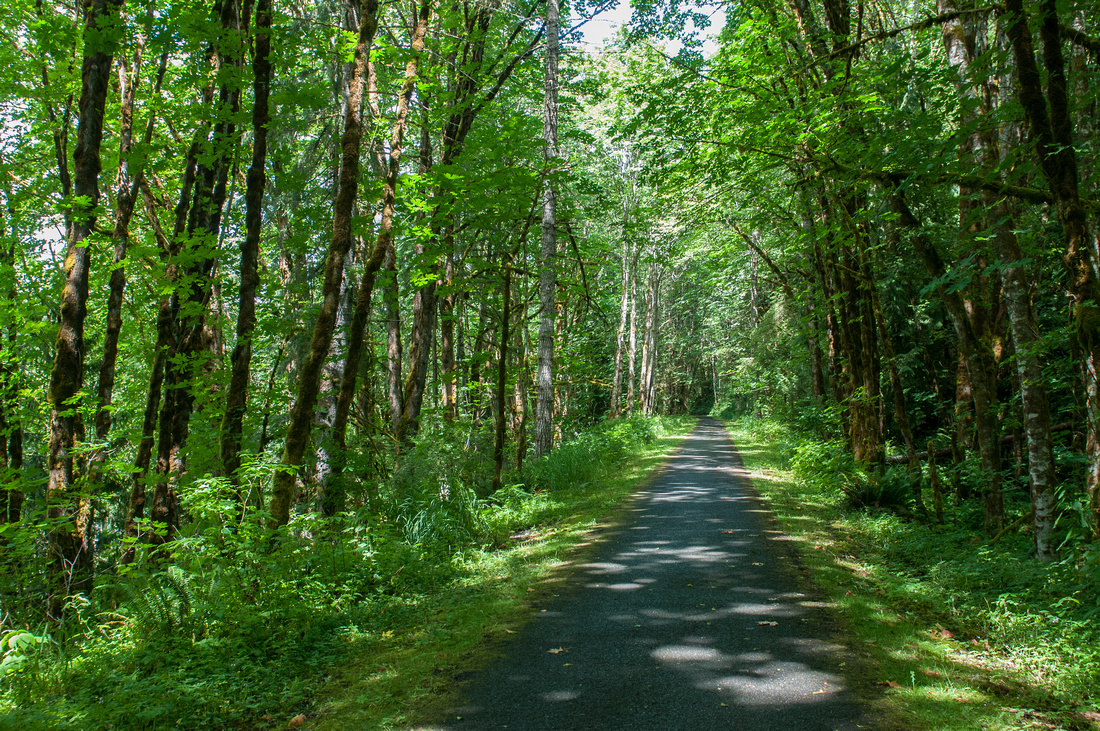 Looking back at the picnic table from the nest site. 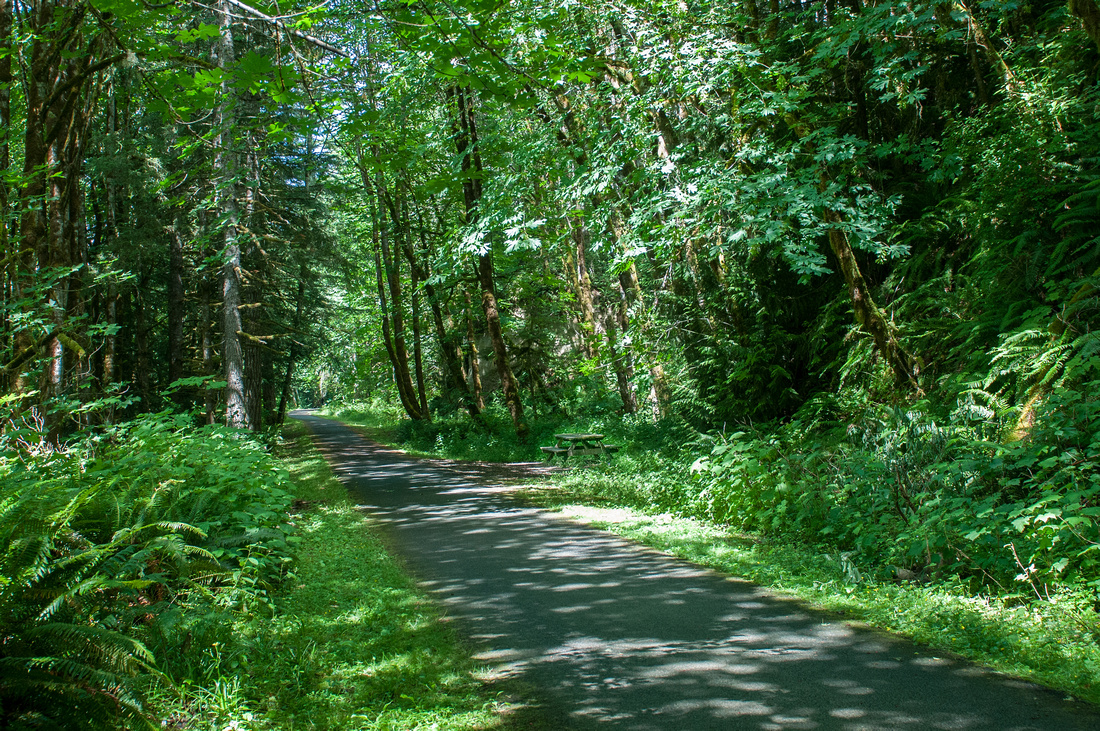 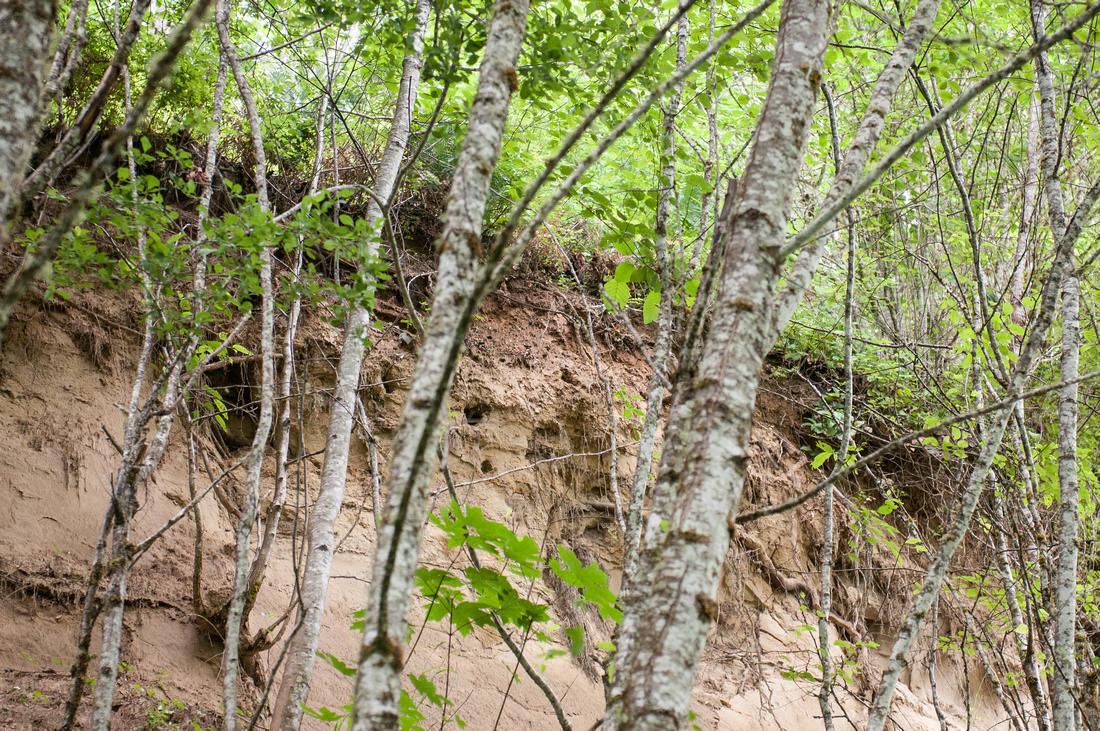 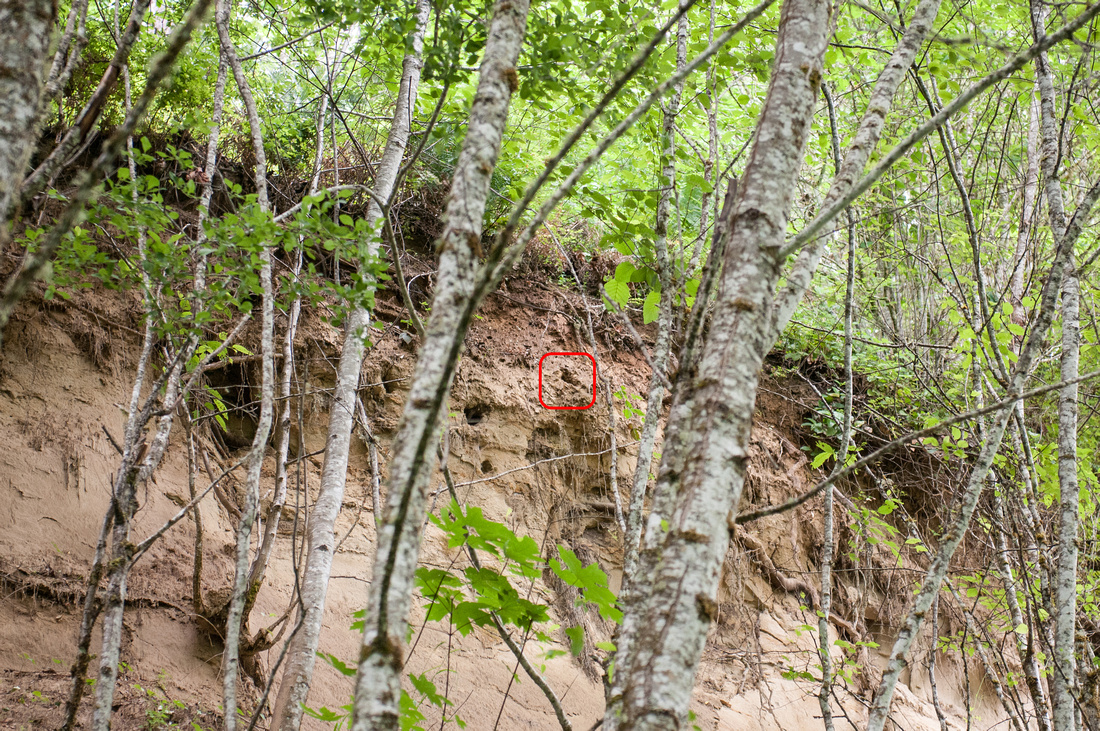 I was surprised to have a Swainson's Thrush show up.  My personal blind must have been working! 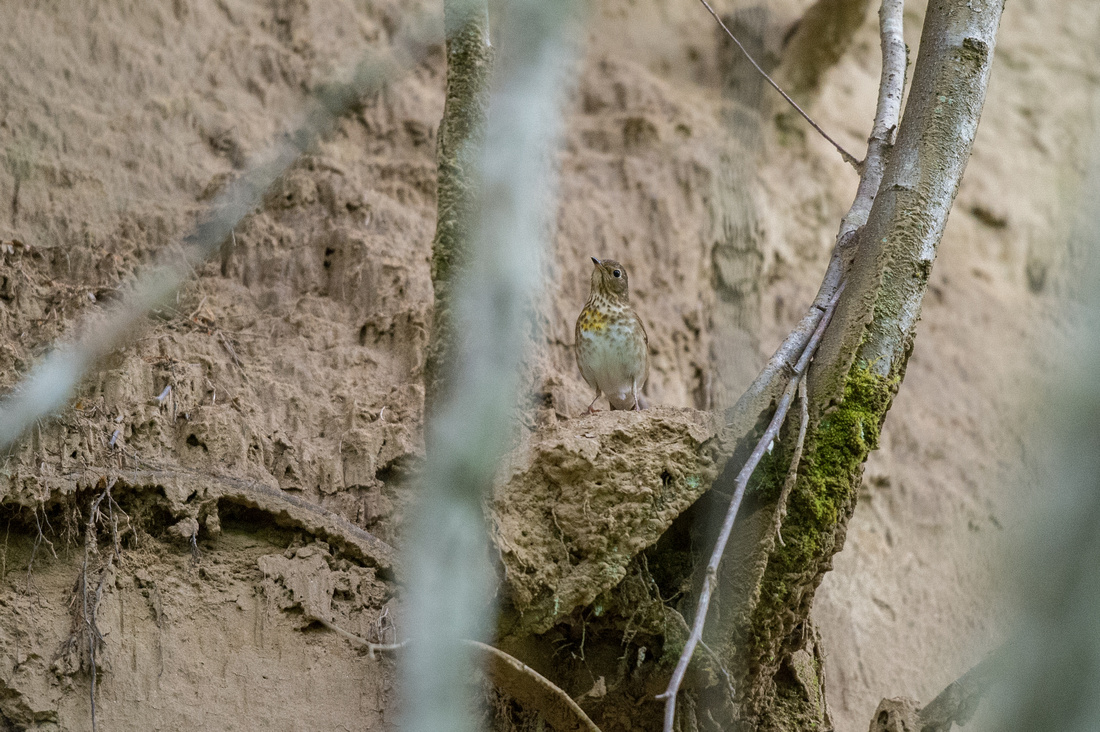 From the look of the food being delivered directly from the bill, I would say an adult is being fed.

Recently hatched chicks get a smallish oily bolus regurgitated from the crop.

The lack of a rufous band across the lower breast is indicative of the male.  And, since females alone have a brood patch, it is safe to conclude the chicks have not yet hatched.

Full Speed Version with Audio. Vocalizations from the burrow and the approaching adult are both perceptible.

Fledglings depart from the burrow 27–29 days after hatching. Three or four days before departure, adults stop their feeding. Adults will often call to the young from a nearby perch outside the burrow, while young respond with begging calls from the entrance of the burrow. Fledglings are capable of limited sustained flight when they emerge from the burrow. Fledglings remain with their parents for approximately 3 weeks and are fed by them infrequently. Crayfish and aquatic insects are among the first prey taken by fledglings. Young birds do not capture live fish for at least 1 week after fledging. When young have mastered the ability to capture prey, they may wander or remain indefinitely in the same general area; adults disperse.