Our five-year search for a NORTHERN GOSHAWK nest came to a successful conclusion today!  I know it has been five years since we began the search because we came onto the birding scene in central Oregon just after the loss of the famous Goshawk nest at Calliope Crossing, near Sisters Oregon in 2011.  This is a link to a news story about the loss of the nest that is appropriately titled Loving Wildlife to Death, By Jim Anderson, a long-time naturalist from the area.

The first few years I searched tirelessly - then reality set in and I figured I should be happy with periodic distant views of the bird flying by one hawk watch station or another.  But on a hike today, Jill queued me into the faint screams of juveniles, and after a cross-country scramble over steep terrain, we were rewarded with a great view of two young birds. One looking as if it had just fledged.

Okay - enough about me.  Here are a few things you might not know about this impressive species.

(*) It is the largest of the three North American accipiters, the Goshawk is a powerful hunter capable of killing a variety of prey, including tree squirrels, hares, grouse, corvids, woodpeckers and large passerines such as American Robins.

(*) When breeding, the female generally defends the nest while the smaller male provisions the family with food.

(*) Currently, the species is not listed as Endangered in U.S. but there is concern that timber harvest and human encroachment are reducing some populations.

(*) Habitat preferences of Goshawks when foraging in various forest types are poorly understood. We do not know how changes in landscape pattern and habitat structure affect foraging behavior and habitat selection; our ability to predict potential impacts of habitat alterations to prey populations is limited.

(*) The average incubation period for each egg is 32 days. 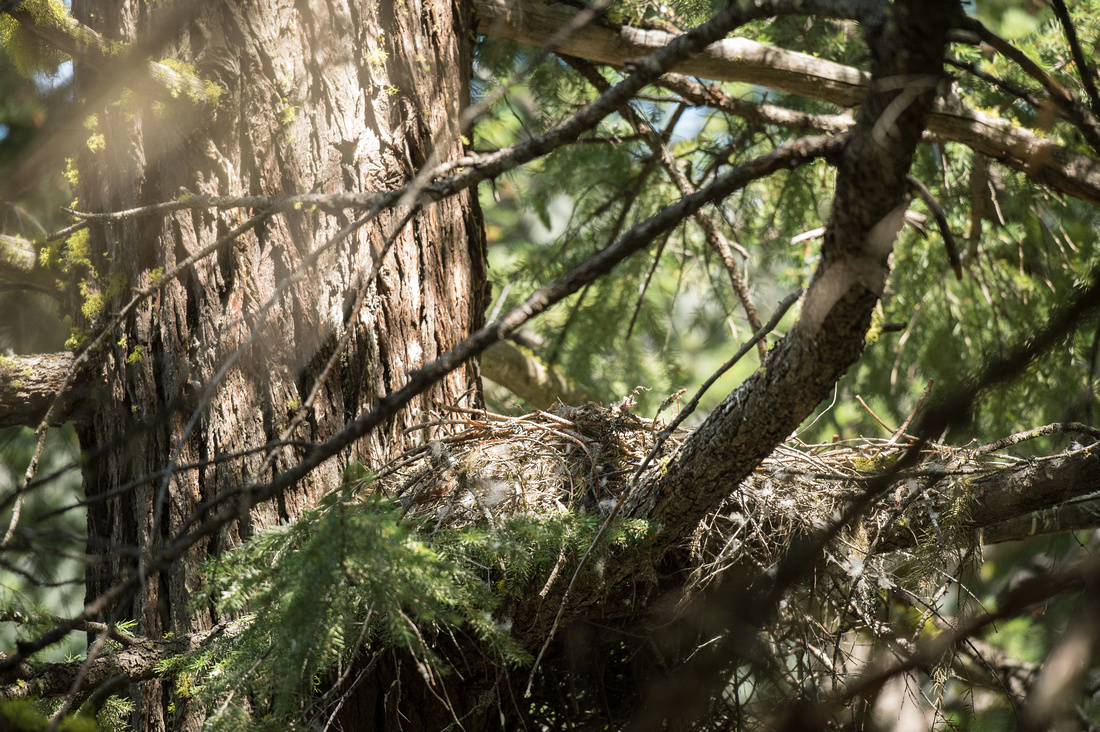 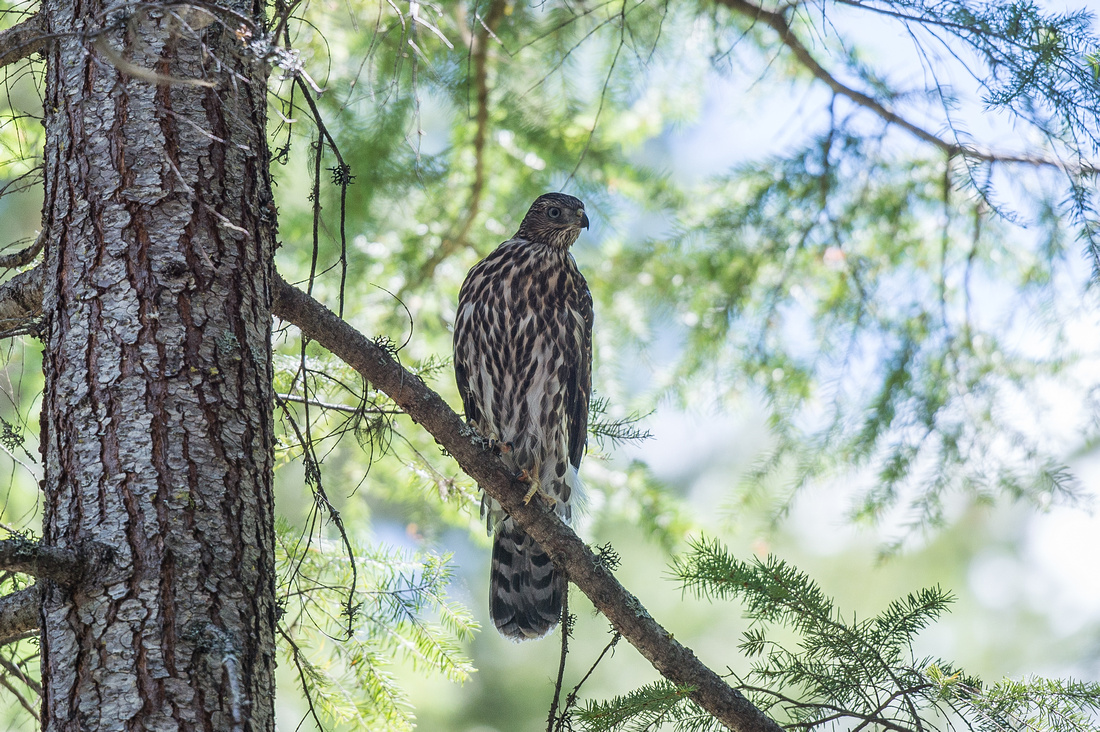 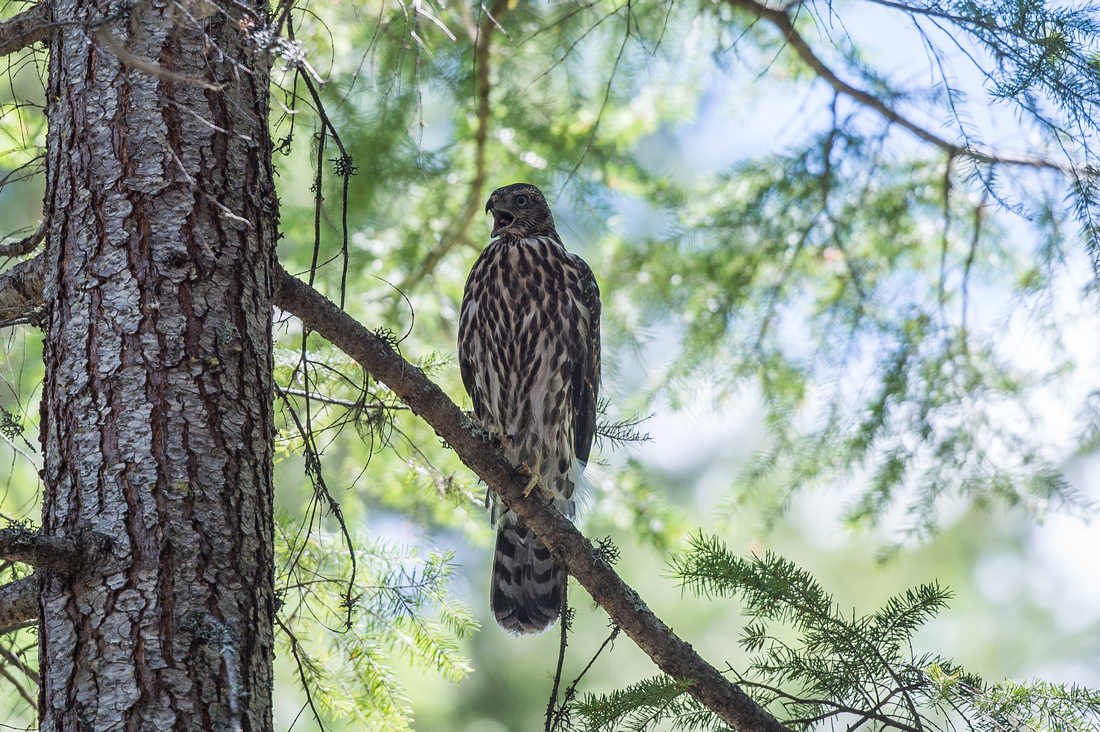 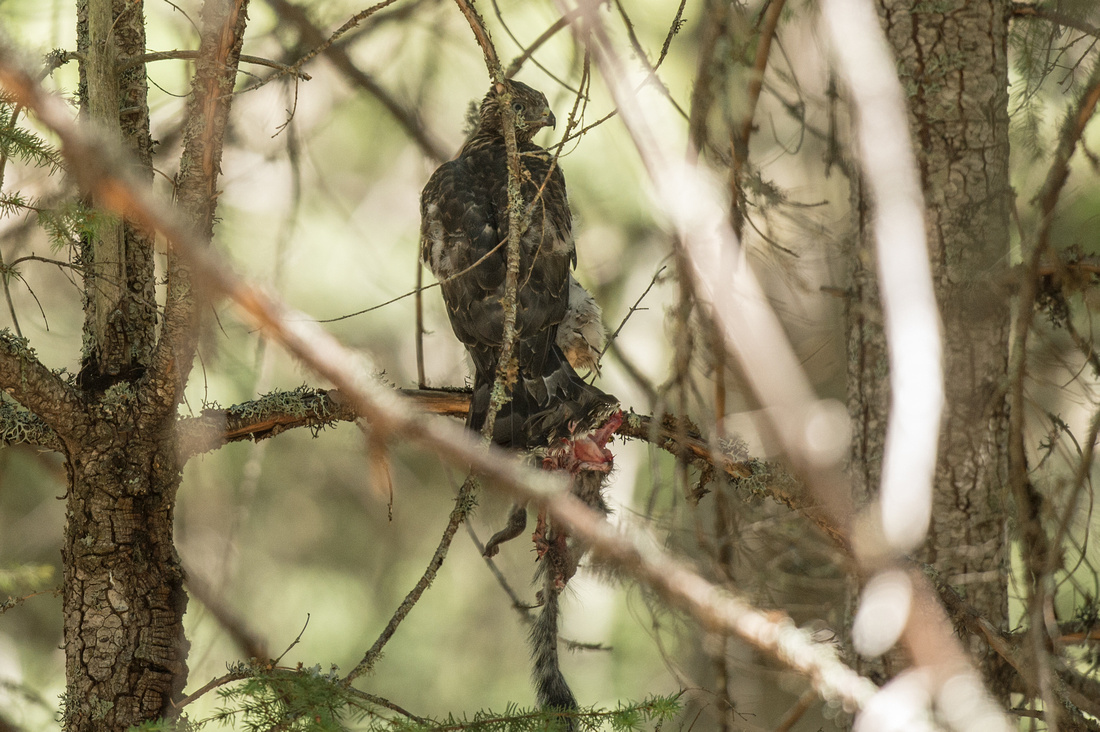 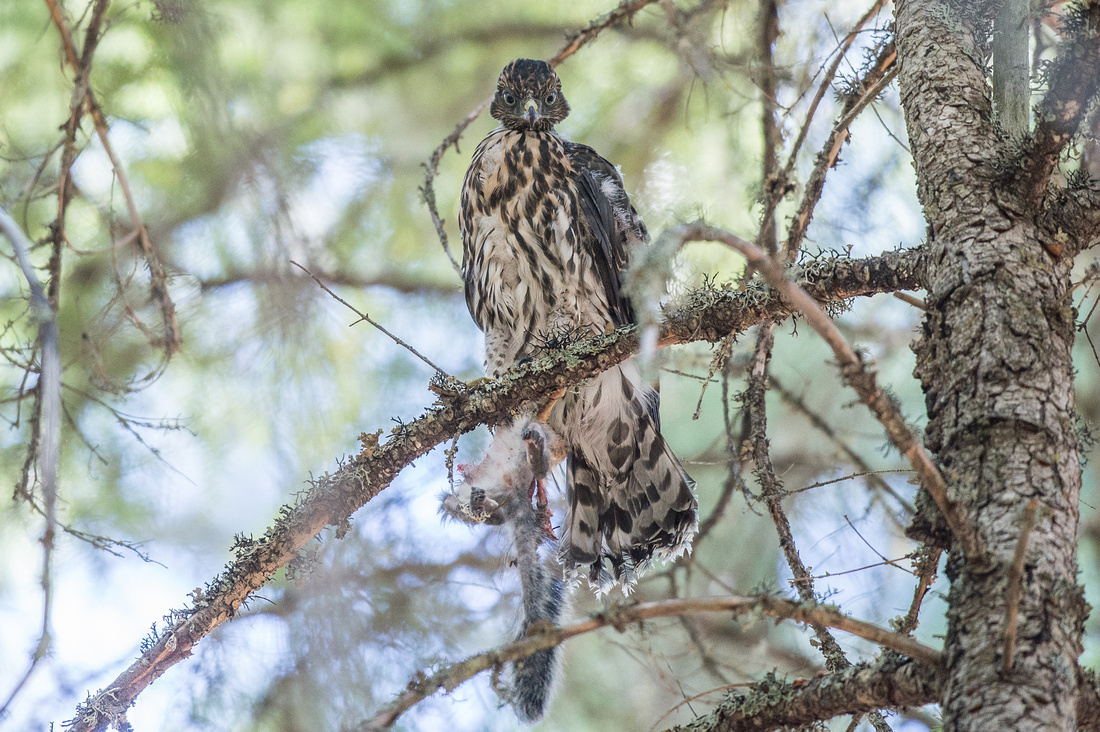 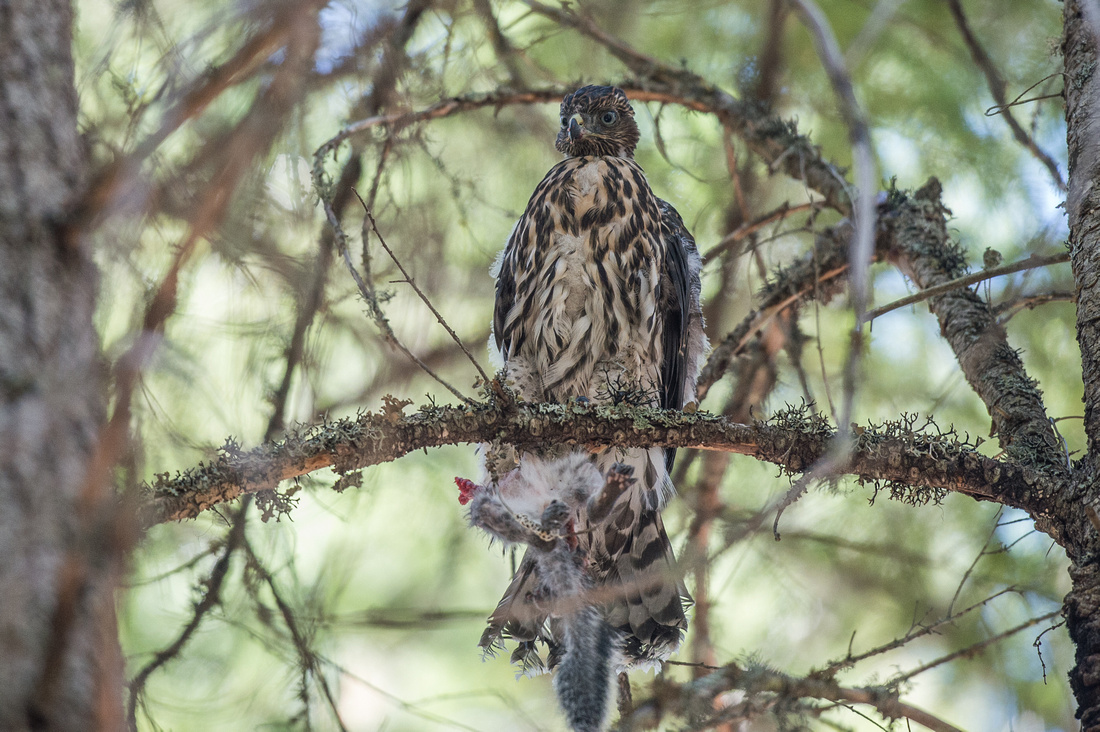 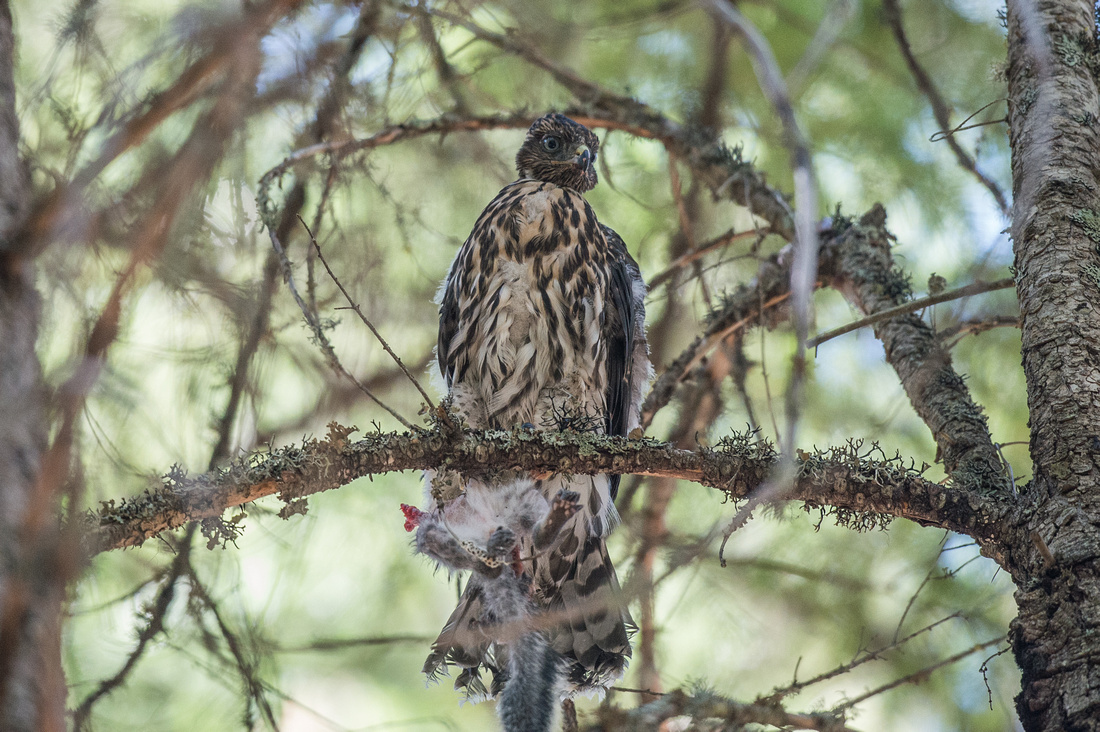 To provide context to the discussion about the size of this species, I've added the picture below of a Goshawk after it was banded last year at the Bonney Butte Hawk Watch Station, near Mt. Hood Oregon.

This bird was treated with care for its safety but also for the safety of those handling it.  The reason for the latter is pretty obvious if you ask me. 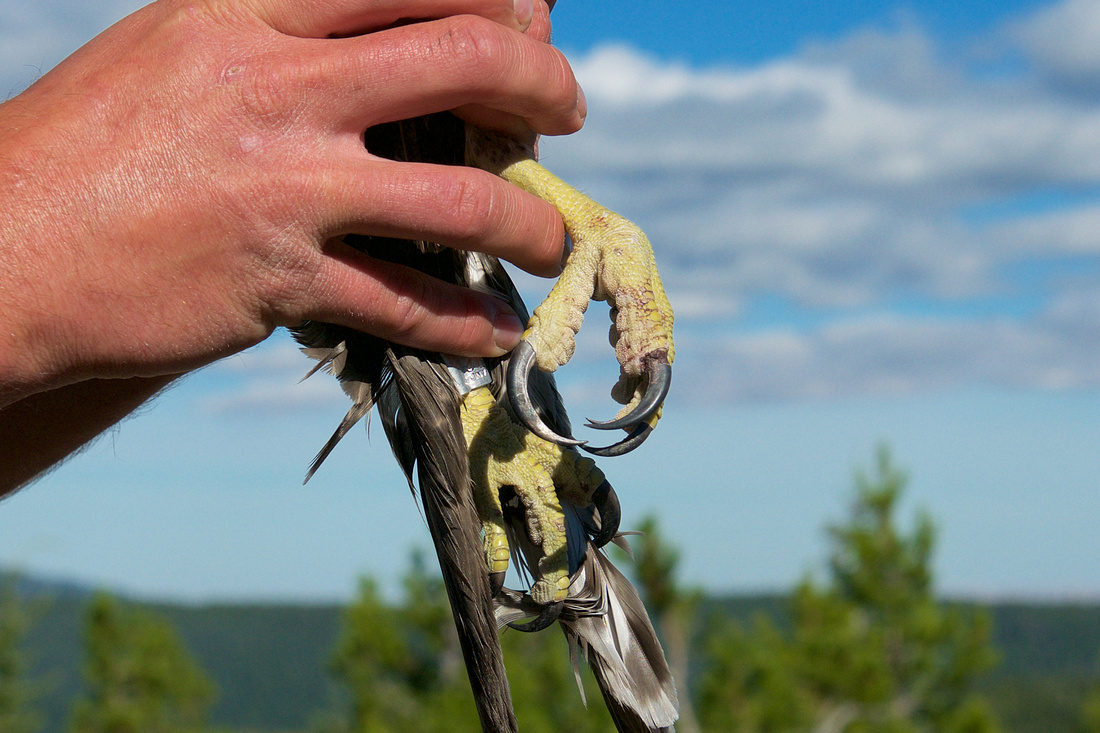 We kept the location of this approachable nest site secret for the protection of the species. But today, finding the nest unoccupied and failing to locate anything as good or better than the first (tree) in the general vicinity, we've decided to share the location of our original observation for the historical record.

Chris Sanborn(non-registered)
These are such beautiful images of the GOHA, and I enjoyed your "foreword" about the search for a nest, which makes your post all the more meaningful. I also appreciate that you're not revealing its location (such a sad story about the stolen and dead chicks 5 years ago.I suppose the scumbag that did that was never found). Anyway, thanks for sharing these beauties with us, Jack.
Carol Bishop(non-registered)
Wonderful pictures! Thanks for sharing them.
jack williamson
Lori,

We love you and your birthday!

Thank you for the comment. Go to https://hawkwatch.org for information about this species.